Hope wrapped in a jacket 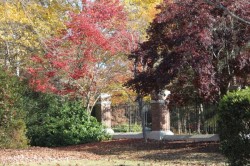 Twenty one years ago, my husband and I were blessed with the birth of beautiful twin girls. For reasons I can no longer clearly remember, we pursued immediate adoption from the foster care system. With eagerness, we attended a training session in hopes of adopting a two or three-year-old boy as a sibling to our newborns. At the training, a notebook was passed around with pictures of children waiting for adoption. My heart broke over the reality of children without forever families, but also rejoiced at the thought that we could be a family for one of the children. When the staff heard about our plans, however, we were told the system would not allow an adoption that interfered with the natural birth order of our family. Our newborn daughters had to remain the oldest children, and no newborns were available for adoption in the system. We would have to wait.

Each year, my husband and I revisited the idea of entering the adoption process, but for one reason or another, kept postponing action.

One Valentine’s Day, however, I opened a present from my husband. As the wrapping paper was torn away, a boy’s youth bomber jacket was inside. As I lifted it up in curiosity, a cardboard heart fell out onto my lap that said, “Let’s go get your little boy!” I eagerly hung the bomber jacket on the corner of a shelving unit in our bedroom as a symbol of hope for a little boy who would one day wear it.

The jacket gets hung in a special spot. 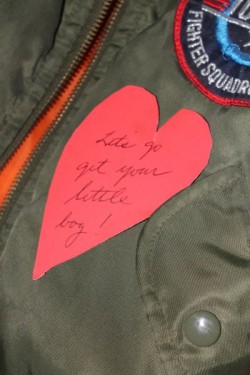 Years went by. The adoption process never began for one reason or another as the circumstances of each year unfolded. It started to hurt to look at the jacket instead of provide hope.

The jacket gets packed up.

A friend of mine had just adopted a little boy, so I composed a letter and sent it to her to save for when her new son was old enough to wear it. The jacket was gone from our bedroom, along with my hope that any serious efforts to adopt would ever occur. My husband and I went on with our lives enjoying the beautiful family God had given us. Everyone knew our desires. There were some calls here and there and some trips, but we came home each time without a child. 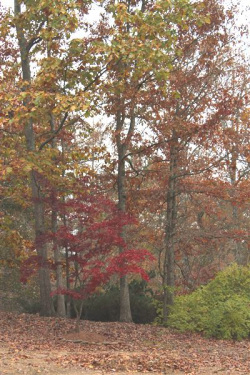 I received a call from a non-blood related family member that her little boy was in need of some interim care. My husband flew to get him. I will never forget meeting our little guy. It was late at night when my husband was returning from the airport. I ran out into the driveway in my pajamas to greet them. The truck parked. My husband exited and reached into the back seat to remove a little boy from a car seat. There he was. There in the halo of the of the spotlight on the corner of our home–in the crisp fall night air–a toddler boy smiled widely at me from my husband’s arms.

That wide grin has been melting my heart ever since.

We woke up the girls and gathered on our bed to let a little boy toddle around in soft covers and make his way from person to person getting acclimated to this new place that would be his home for a while. He liked free-falling into the soft bedding much like a child falls into a pile of leaves in autumn.

That night began a journey for our family. We got to know this little boy, conversed daily with his birth mother, and we waited for his story to unfold.

One beautiful fall day nearly a year later, a package arrived. I opened it to discover the same bomber jacket I had sent my friend was being returned. As it turns out, her son had never worn it. Instead, she expressed in a note that she had felt her role was to simply keep it safe while the waiting was difficult. When she heard we had a little guy in our home, she gave it back.

I distinctly remember calling our little boy into the house from outside. We were in our foyer when I showed him the jacket that had just arrived. I put it on him right there in the sunlight streaming in from the windows above our front door. In went one arm, then another, then I zipped it up as he stood still and smiled at me.

Perfect fit. Not too big. Not too little. Just right.

Out he went to play again wearing a jacket that had represented hope, then hope deferred, then hope again. 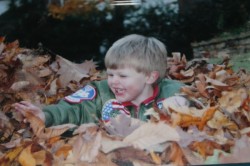 Now that hope is reality and we celebrate our son’s adoption day every year—November 29—in addition to his birthday.

And the jacket, now outgrown, hangs again in its spot in our bedroom as a daily reminder of God’s grace and perfect timing. 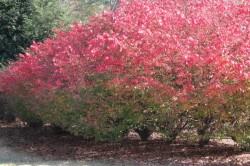 © 2014 by Oaks Ministries. All rights reserved.