Should we be afraid of Satan?

I walk almost every day.

Recently I put on headphones, turned on a podcast, set my stopwatch and set off at a brisk pace. It wasn’t dark yet, so I could see the sidewalk clearly.

I was listening to a podcast by Nothing is Wasted. Right when the guest was talking to the host, Davey Blackburn, about Adam and Eve being deceived by the serpent in the garden of Eden, 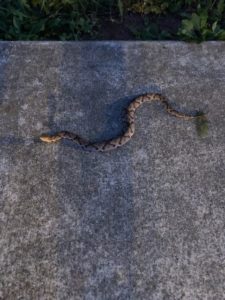 Yes. This really happened. As words about a serpent were in my ears, a serpent appeared on the sidewalk in front of me.

It was a moment.

He was a little guy, but I didn’t like his markings and I didn’t like how his head was raised. He looked like he had attitude. He looked pesky. I was also wearing capris, so my ankles and lower calf were exposed.

I have killed snakes in my life.

Once I killed two thick, four-foot snakes that I found in my garage. Chopped their heads right off with pruners while my young girls watched their mom protect the house from predators! I felt like superwoman, but when I showed pictures of the bloody aftermath to my dad,

Turns out, in my efforts to protect the house, I had killed harmless snakes that had been keeping rodents from wrecking havoc in my garage. So as I stood on that sidewalk staring this creature down, you can understand why his words were recalled: “most snakes aren’t dangerous” and “don’t kill the good ones.” So I picked up a stick and urged my slithery interruption back into the woods.

Then I got shivers.

Once the encounter was over, I still didn’t like his markings or raised head, nor the fact that I was listening to a podcast about the garden of Eden right when I spotted him. 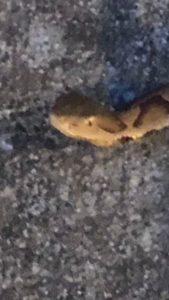 When I got home, of course, I showed the pictures to my dad who confirmed a copperhead sighting. Look at the markings of X’s all the down his length, and look at the vertical pupils. Dad also explained that copperheads don’t grow really large, so this guy was ready and able to bite with venom.

The entire scenario got me thinking for days.

First off, there is a devil always ready to appear in our path in the form of temptations and lies, hoping we succumb to what will not satisfy, or believe what is not true. His strikes are venomous, yes, but we must remember he is always at our ankles. He is always down low on the initial approach,

where we can stomp on his head.

Let me explain what I mean. After Adam and Eve ate from the tree of the knowledge of good and evil, choosing to live independently of our Creator, God cursed Adam, Eve, and also the serpent.

Here is what God said to the serpent:

So the LORD God said to the serpent: “Because you have done this, cursed are you above all livestock and every beast of the field! On your belly will you go, and dust you will eat, all the days of your life. And I will put enmity between you and the woman, and between your seed and her seed. He will crush your head, and you will strike his heel. (Genesis 3:14-15, emphasis mine)

That part about enmity between Satan and the woman, and his seed and hers, is the first prophecy of Jesus. The woman’s seed, Jesus, would crush Satan’s head (complete destruction) and all Satan would ever be able to do is strike Christ’s heel (cause some interference, yes, but be unable to stop any part of God’s plan).

Be alert and of sober mind. Your enemy the devil prowls around like a roaring lion looking for someone to devour. Resist him, standing firm in the faith, because you know that the family of believers throughout the world is undergoing the same kind of sufferings. (1 Peter 5:8-9, emphasis mine)

We need to be on the look-out for serpent sightings because his bites contain poison, but much like my encounter with a pesky teen-aged copperhead, Satan stays at our heels when we respond by renouncing his lies (I will not believe this lie.), standing in truth (I announce the truth), and not succumbing to temptation (do not act on the temptation). As children of God, we can walk right past the obstacles the enemy puts in our way in His strength instead of ours!

Keep Satan in his place.

When temptation appears, we decide whether to stop and linger, back up, or walk away. We decide whether to keep the influence of the enemy down low or give him room to do damage. In so doing, we create a tiny illustration of crushing Satan’s head. We provide a foretaste of the ultimate moment when Christ will cast Satan into his own hell forever.

Then the devil, who had deceived them, was thrown into the fiery lake of burning sulfur, joining the beast and the false prophet. There they will be tormented day and night forever and ever. (Revelation 20:10)